The Watermelon Park and its surrounding shops at a popular and second largest market in Calabar, Eka Eka Oqua Market aka Marian Market was on Friday night, July 3, 2020 gutted by fire.

Grassroot Reporters’ correspondent who was at the scene of the incident at about 9:15pm said men of the state or federal fire service were not on ground to put off the fire. The traders who were in tears and some youths in the area made frantic effort to put off the fire to no avail.

When Grassroot Reporters visited the scene of the incident on Saturday morning, the traders who looked devastated were seen picking the remains of their caravans.

An eyewitness said the fire started at about 8:10pm on Friday. He said the cause of the fire is believed to an electrical fault from one of the shops. 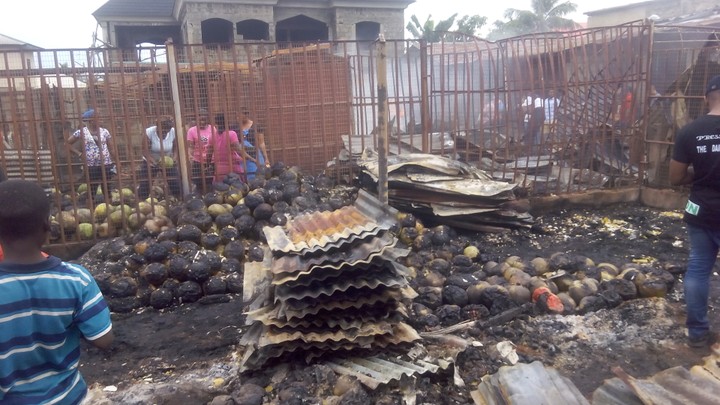 Speaking with Grassroot Reporters, one of the traders whose son’s shop was completely razed, Mrs. Obot Jack wept uncontrollably, recounting the loses his son has incurred as a result of the fire incident. 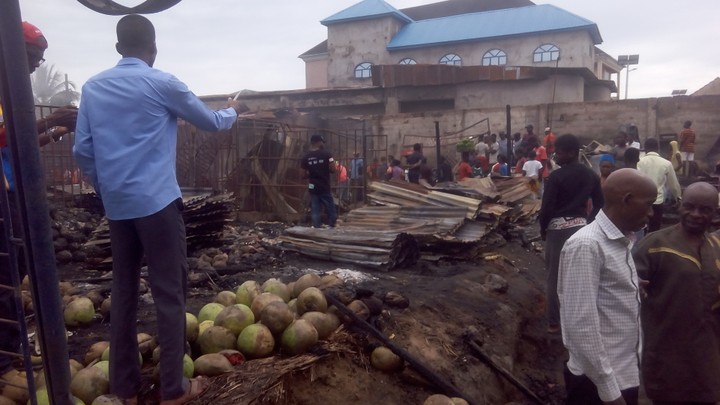 She said:-
“This shop belongs to my son. Yesterday he was not around. It was around 8:30pm that one of my cousins that lives around there called me and asked me where my son is and I told her my son is not around. She shouted and told me to rush to my son’s shop, that all the shops around Watermelon Park have been gutted by fire.

” I rushed there with one of my sons but when we got there, the flames of the fire could not allow us to enter there.

“We called the State Fire Service but they refused to come, saying they’re waiting for orders from higher authority. But the Nigeria Air Force came with their fire fighting van but it was already late as at the time they arrived as all the shops had been razed down. The boys around tried to use water to quench the raging fire but it was fruitless.

She called on government to come to their aid:-
” I am calling on the government to come to our aid because we do not have other means of livelihood especially at this period of Covid-19. My son was using this shop to train himself in school; now that the shop has been gutted by fire, his education is at stake”. She lamented.

Just like Mrs. Jack, Tom Ability, a shop owner whose shop and goods has been razed to ashes could not control his tears as he watched his shop in flames.

He said:-
“This is the only shop I have. I couldn’t get anything out of the shop, everything razed down. I am calling on the federal and state government to come to our rescue. Right now, I’m confused because I don’t have any other means of survival”.

The female student of Babcock University who went viral last year after appearing in a s...Read more

A man has begged a jury after narrating how he mistakenly killed a friend during intense...Read more

So sad, lyk seriously, may allah offer you a special and good thing